An ideal object for high-precision experiments is a single particle, suspended in a high vacuum and confined in a small volume for a long time. We use the beta-decay Paul trap (BPT) to recreate these ideal conditions and perform precision nuclear beta decay experiments that address problems ranging from probing the nature of the weak interaction to measuring beta-delayed neutron emission probabilities that are important inputs for the astrophysical rapid neutron-capture process.

This use of an ion trap to study beta decay allows for the observation of the recoiling daughter nucleus, which is typically not accessible in traditional beta-decay experiments. Our setup includes a variety of detectors, such as double-sided silicon strip detectors and microchannel plates, surrounding the ion trap. These detectors measure the energy and directions of the outgoing particles, allowing access to the properties of the emitted neutrino, from which we can determine various beta-decay correlations.

One of our key experiments measures the beta-delayed neutron angular correlation coefficient in the beta-delayed alpha-decay of lithium-8 and boron-8. In this decay, the parent particle decays to a broad excited state in beryllium-8, and then immediately breaks into two alpha particles. By measuring the energy difference of the two emitted alpha particles as a function of the beta direction from the decay of lithium-8 and boron-8, it is possible to probe physics beyond the Standard Model by carefully comparing the measured energy spectrum to the model’s prediction. 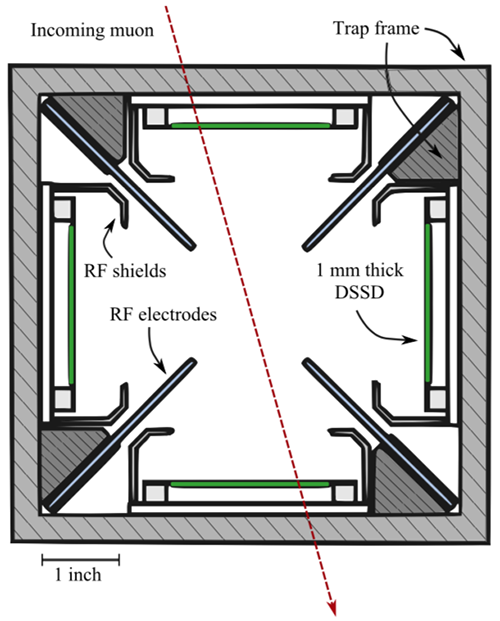 The use of cosmic-ray muons in the energy calibration of the Beta-decay Paul Trap silicon-detector array | Nucl. Instrum. Meth. A, 2018 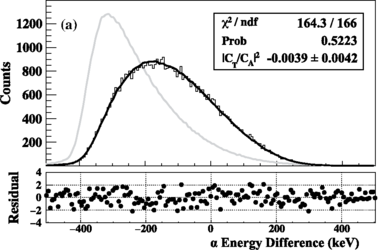 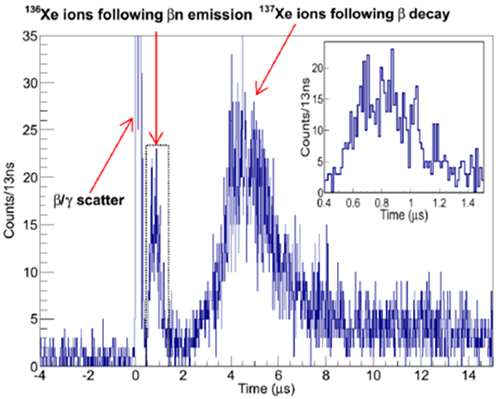 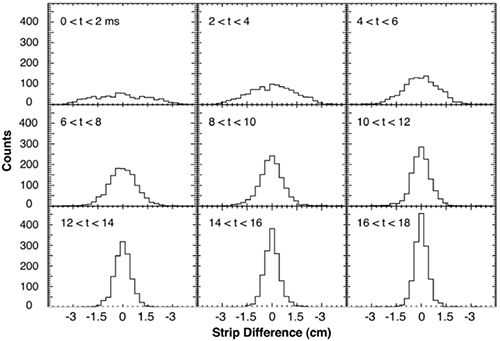 Rapid technological innovation drives the ever-evolving frontier of nuclear forensics; however, the field is still overwhelmed with large uncertainties in nuclear data. Precision measurements of nuclear beta decay are an important tool for nuclear applications.

One of the most straightforward and reliable ways to determine the number of fissions that occurred in a chain reaction is to detect the characteristic gamma rays emitted during the beta decay of the fission product. Fission chained reactions typically involve many short-lived radioactive isotopes, which are difficult to study due to their short existence. Therefore, most of the information of such reactions is obtained by studying the relatively long-lived radioactive isotopes produced from the shorter-lived ones.

Many of these fission products decay by the emission of a beta particle and are typically followed by the emission of characteristic gamma rays. We obtain a branching ratio by precisely measuring both particles from the same decay event, allowing us to determine which fraction of the particles decay by a particular mode. High precision in the determination of these branching ratios is paramount to other closely related studies such as fission product yields, as these are determined using gamma ray spectroscopy and rely heavily on these branching ratios.

We produce our source at Argonne National Laboratory, taking advantage of the Californium Rare Isotope Breeder Upgrade (CARIBU) capabilities in ATLAS. The high-purity sources are implanted on a thin carbon foil to minimize self-attenuation of the low-energy beta particle in the sample. The rate of implantation is monitored by a large volume HPGe detector, which in turn provides information on the purity of the sample by detecting the characteristic gamma rays from the shorter-lived fission products that make up the beam.

To measure our source, we insert carbon collection foil into the center of a proportional gas counter, with no internal windows, for beta detection. This type of detector has a low-energy threshold and yields nearly 100% detection efficiency for charged particles. The gamma rays are counted using a HPGe detector—placed directly in front of the gas counter—that was calibrated at Texas A&M University’s Cyclotron Institute. The gamma-ray measurements, performed both with and without coincident beta-particle detection, is performed in the standard measurement geometry that was set in place by the Texas A&M group for many precise gamma-ray branching ratio measurements and for detailed studies of internal conversion.